Catch Me If You Can

House prices grew by 10.8% between April 2013 and 2014, according to the S&P/Case-Shiller 20-City Composite Home Price Index, which was less than the 12-month growth rate of 12.4% seen in March. Similarly, the Federal Housing Finance Agency’s Purchase-Only Index rose 6.0% compared to 6.4% in March. On a seasonally-adjusted monthly basis the 20-City Composite index increased by 0.2%, while the Purchase-Only index was virtually unchanged. Both indices show that annual house appreciation has slowed over the past five consecutive months ending in April and suggest the housing market may be returning to its long-run trend of growth. 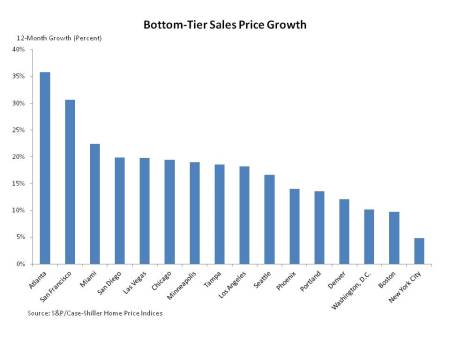 The growth rates may be inflated, however, due to previously distressed homes being resold. For instance, CoreLogic provides a comparable house price index to the S&P/Case Shiller series and also has an additional one that excludes distressed homes. Foreclosed properties generally sell for a discount, currently at around 18 percent in April, according the National Association of Realtors, which suggests they would weigh down the overall market index. Yet since 2012, it appears distressed sales have added to the market’s growth, as seen the figure below.

What’s occurring is during the housing crisis, many homes were foreclosed upon. In fact, the number of homes in foreclosure eventually peaked in the first quarter of 2010 at over two million, based on data from the Mortgage Bankers Association. These foreclosed homes were bought at deep discounts, ranging up to 40 percent and even higher in certain areas by 2009, as the chart above indicates when distressed sales are included. However, once the homes were repaired and later sold again either in the near-term for profit or when the new homeowners decided to move, the sales price was dramatically higher than the original price, owing to those heavy discounts. And as house prices recovered in general, those who waited longer to sell saw even larger increases in their sales price relative to the original purchase price. For instance, over the 12-months ending in April of this year, the inclusion of distressed properties added over two percentage points to overall growth in the price index, but the actual sales price for those troubled homes was likely at or below those of comparable non-distressed homes. So, this is more of a catch up to the race than a grand spree in house prices.

For full histories of the composites and 20 markets included in the Case-Shiller composites, click here