According to the BLS Job Openings and Labor Turnover Survey (JOLTS), the number of open construction sector jobs declined on a seasonally adjusted basis from 127,000 in February to 104,000 in March. While still high relative to the post-recession period, the March level was the lowest since July of last year but the 11th consecutive month above 100,000. Winter conditions slowed the growth of home construction in recent months, and this factor could have slowed the number of jobs offered by builders and remodelers.

On a three-month moving average basis, the open position rate for the construction sector fell to 1.93% for the month of March, continuing a decline begun in December. While the open rate has declined somewhat in recent months, the rate of open jobs in construction remains above any rate witnessed after the recession and prior to 2013.

Monthly gross hiring in construction declined somewhat, falling on a seasonally adjusted basis from 289,000 to 260,000 from February to March. Over the same period, the hiring rate, as measured on a 3-month moving average basis, was effectively unchanged at 4.67% for March.

Two trends in the construction sector are worth noting. First, the layoff rate for the sector (graphed above as a 12-month moving average) has continued to fall. Second, the sector hiring rate has fallen noticeably since the fall of 2013. The trend lines over the last two years – a falling hiring rate, an increasing opening rate trend, and a declining layoff rate – are consistent with some construction firms having trouble contracting with workers for specific projects. However, future employment reports will indicate whether recent hiring weakness is mostly due to weather effects or reflects new baselines for construction activity.

Monthly employment data for April 2014 (the employment count data from the BLS establishment survey are published one month ahead of the JOLTS data) indicate that total employment in home building stands at 2.257 million, broken down as 659,000 builders and 1.598 million residential specialty trade contractors. 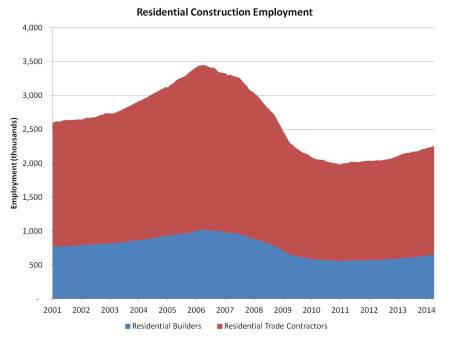