The number of open, unfilled construction sector jobs increased 38% from 113,000 in January of 2013 to 156,000 in January of 2014, according to the BLS Job Openings and Labor Turnover Survey (JOLTS). The January count of open jobs in the sector is the second highest since May 2008.

While the recent increase in unfilled positions is consistent with the increase in construction sector activity, particularly for home building, the data continue to reflect only modest growth in total employment. The rise in the count of open positions thus matches reports of local labor shortages.

For the construction sector, monthly gross hiring increased somewhat, rising on a seasonally adjusted basis from 251,000 to 285,000 from December to January. Over the same period, the hiring rate, as measured on a 3-month moving average basis, fell from 5.1% to 4.7%. The pace of construction hiring slowed during 2013 compared to 2012 levels and this trend continued at the start of 2014.

Combined with a declining sector layoff rate (non-seasonally adjusted), charted as a 12-month moving average in the graph above, the uptick in open positions since 2012 suggests more, if modest, construction hiring in the months ahead – if firms can find workers with the right skills.

Monthly employment data for February 2014 (the employment count data from the BLS establishment survey are published one month ahead of the JOLTS data) indicate that total employment in home building stands at 2.227 million, broken down as 648,000 builders and 1.579 million residential specialty trade contractors. 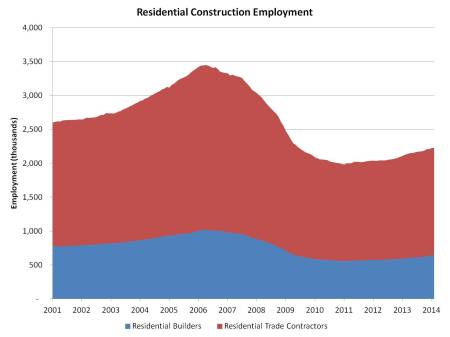 ‹ Consumer Credit Expands, But At a Slower Rate
Labor Shortages Are A Key Issue for Housing ›