The Decline in Geographic Mobility

Geographic mobility, the movement of people within the United States, declined steadily over the past three decades. Between 1984 and 1985, 20.2% or one out of every five Americans over the age of 1 year moved. In the most recent period, between 2012 and 2013, the mover rate was only 11.7%. The mover rate is a measure of geographic mobility provided by the Census Bureau, calculated by taking the number of movers divided by the total population over 1 year old. 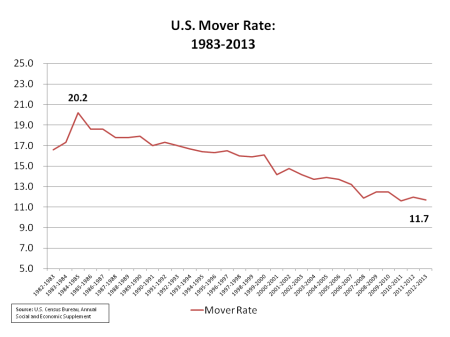 The decline in geographic mobility is due to a combination of factors. In a recent paper from the Federal Reserve discussion series, researchers find declining labor market transitions, rising homeownership rates, and an aging population to be contributing factors.

The number of seniors is steadily increasing. By 2030, the Department of Health and Human Services forecasts that there will be 72.1 million seniors representing 19.3% of the total population. The long-run implication is that measures of geographically mobility are unlikely to return to levels seen in the mid-eighties.

Instead of focusing on measures of geographic mobility for the entire population, it is often useful to pay close attention to the mobility of a specific age group. Individuals between the ages of 25 to 29 years are of interest to housing sector because these individuals represent future first-time homebuyers. Individuals in this age group are typically transitioning into the labor, marriage, and housing market. The Census estimates the median age at first marriage in 2013 for men was 29 years and 26.6 years for woman. In addition, using data from the Census Bureau’s American Housing Survey, NAHB estimates the average of the first-time homebuyer to be 33. 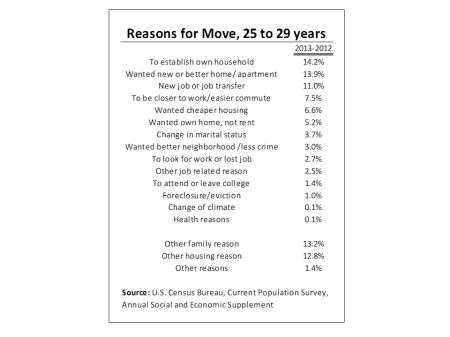 Overall, measures of geographic mobility for the entire population declined from the prior period. The aging population makes it unlikely that measures will recover to prior levels. Instead, focusing on the most mobile age group, those between 25 and 29 years, it appears as though reasons for moving are promising in that the most common discernible reason was to establish own household.