The Bureau of Labor Statistics (BLS) released the Employment Situation report for November. Payroll employment expanded by 203,000 and the prior two months were revised for a net increase of 8,000. The pattern in job growth is beginning to look like the substantial and sustained improvement in the labor market that the Federal Reserve has identified as the condition for beginning the process of winding down its bond purchases, popularly referred to as QE3, the third round of quantitative easing. 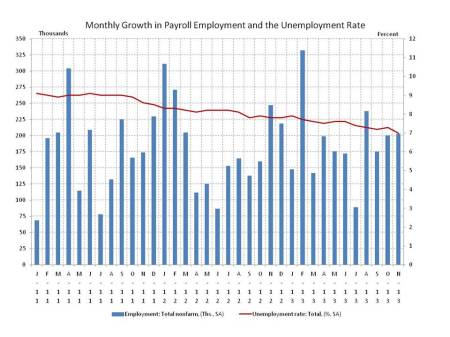 The unemployment rate declined to 7.0% from 7.3% in October, but this sharp decline should be viewed with some skepticism. The household survey treated furloughed federal government workers as unemployed in October and employed in November. The large number federal workers changing status combined with federal workers that were misclassified in October and large swings in and out of the labor force in October and November suggests the drop in the unemployment rate may be distorted by procedural problems related to the furlough.

Possible technical problems in the unemployment rate aside, recent growth in payroll employment may convince the Fed that the labor market is healthy enough to begin easing monetary stimulus. The earliest possibility is the December 17-18 FOMC meeting. Fed officials have been reluctant to set a specific date or take any date off the table. December is a possibility but not a certainty. One thing is clear, absent any significant setback in labor market conditions the winding down of QE3 will begin sooner rather than later.