What Kind of Homes are in the Rental Housing Stock?

In recent years, demand for rental properties has increased, leading to declining vacancy rates and increasing rents. Although this increased demand is understood, the structure of the rental market may be less well known. This post examines the stock of rental housing by structure type.

According the Census Bureau’s 2011 American Housing Survey (AHS), there were nearly 39 million occupied rental properties in the United States. The largest single share of rental properties was allocable to single-family detached homes, which represents 29% of the market. When combined with townhomes (single-family attached), single-family units make up more than a third (36%) of the rental housing stock. 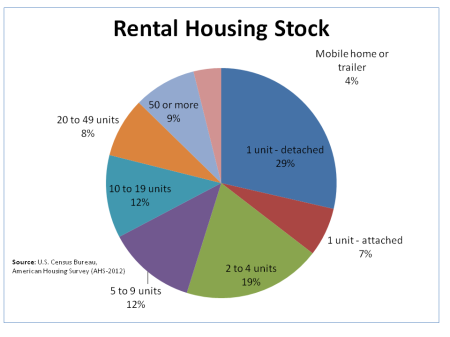 The AHS also allows for the analysis within structure type. For example, in 2011 15% of all occupied single-family detached homes were rented. Over 86% of occupied units in structures with 2 or more units were rental units in 2011.

The share of rented properties increased across all structure types from the last survey conducted in 2009. The largest percentage point increase occurred for townhomes, which saw its rental rate increase 5.5 percentage points to 39.4%.

The demand for rental properties has increased in recent years with homeownership rates below the 20-year historical average of 66.9% and 4.3 percentage points below the peak reading of 69.4%. Understanding the make-up of the rental market will help builders meet future needs. Analysis of the AHS data shows that the largest share of rental properties is single-family homes and the largest percentage point increase occurred for single-family attached properties. However, such homes are typically not built-for-rental purposes, but transition from owner-occupied to rental tenure as they age.

In contrast, the overwhelming majority of multifamily homes are built as rental properties. Yet, as single-family homes age, they too play an important and growing role in the rental market.