Amid Cutbacks, Construction Inspections Are on the Rise

Before it can be completed and delivered to a buyer, the median single-family home requires eight separate inspections, according to a recent survey of NAHB’s builder members.  At the extreme, 17 percent of builders report that their typical home requires at least 15 different inspections. 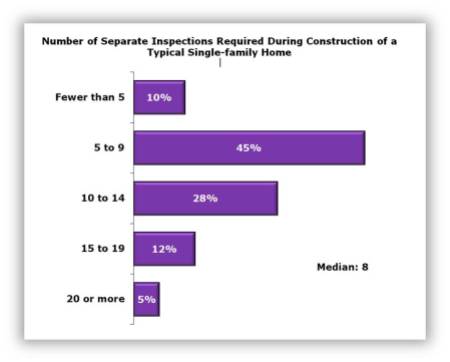 The survey was in the form of special questions appended to the instrument for the September NAHB/Wells Fargo Housing Market Index.  The survey found relatively few cases where the number of inspections is causing serious chronic delays so far.  Only 8 percent of builders responding to the September questions said that it usually takes their local building departments more than 48 hours to respond to requests for inspections.

Delays were more of an issue with building plan reviews.  In the same survey, over three-fourths of the builders said it took at least a week to obtain a plan review for the typical single-family home, and 35 percent said it took more than two weeks.  Although many builders said this was simply standard practice in their local markets, NAHB staff with experience in local building departments believe that a standard review of a simple single-family home should generally take no more than a week.

Thus, staff cutbacks at local building departments have emerged as another obstacle to builders (along with rising interest rates and shortages of labor,  building materials and lots), impeding their ability to respond quickly to increased demand.

This threatens to become more of an issue in the future, as the recovery in residential construction is still in its early stages, and local adoption of energy codes and proposals currently under consideration by the International Codes Council have the potential to increase the number construction inspections further.

The full report on the survey of construction inspections and plan review is available here.