One in every eight Americans is now over the age of 65. The senior population (65 and older), is estimated by the Census to be 40.3 million in 2010, increased 15.1% from 2000. By 2030, the Department of Health and Human Services forecasts that there will be 72.1 million seniors representing 19.3% of the total population. The aging of the American population represents unique challenges and opportunities for the housing industry as this segment of the population makes housing choices based on longer life expectancy.

Although all 50 states, with the exception of Rhode Island, experienced growth in the senior population from 2000 to 2010, the growth rate and the percent of population 65 years and older is not the same across all states. The uneven aging of America is largely attributed to the increased social and financial cost of moving as one gets older. 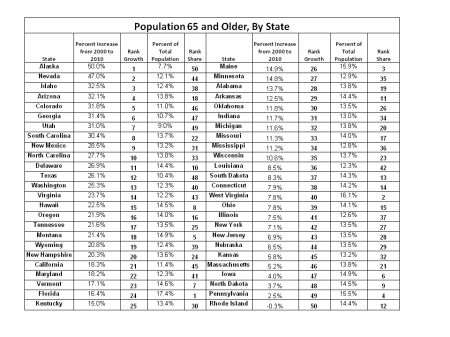 For example, in Pennsylvania from 2000 to 2010, the population under 45 decreased by 5% as many left to state to pursue economic opportunities elsewhere. However, the population over 45 increased by 16% as many residents decided to “age-in-place.” This pattern of migration made it possible for Pennsylvania to maintain the fourth highest share of its population 65 and older while experiencing the smallest growth rate in the senior population. 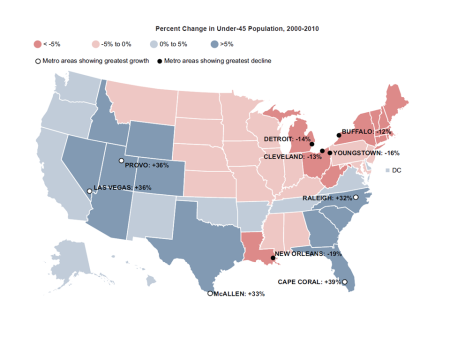 In Texas from 2000 to 2010, on the other hand, the population under 45 increased by 13% as many migrated to the state to purse better economic opportunities. Migration coupled with an above average birth rate made it possible for Texas to maintain the third lowest share of its population 65 and older while still experiencing a significant growth in the senior population of 26.1%. The significant growth rate was largely the result of the internal aging of the population, however Texas is also ranked in the top ten as a retirement destination based on low cost of living, modest taxes, and nice weather. 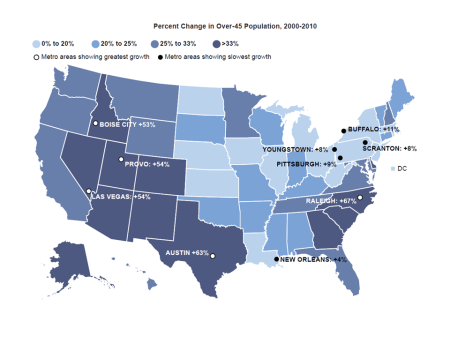 Households headed by seniors are predominantly owned. According the Census Bureau’s 2011 Current Population Survey, among households headed by seniors, 81% were owners and 19% were renters. Although this figure has been relatively consistent over the last decade, longer life expectancy will force many seniors to make housing choices to better serve their needs. These choices may include smaller housing to account for empty nesting, multigenerational housing, remodeling to “age-in-place,” and when necessary assisted living. The extent of the increase in demand for these housing solutions will vary by state and shape builder business strategies in the years ahead.