According to the latest data from the Census Bureau, taxes paid by homeowners and other real estate owners remain the largest single source of revenue for state and local governments. At 34%, property taxes represent a significantly larger share than the next largest sources: individual income taxes (24%) and sales taxes (21%).

State and local government property tax collections continue to increase on a nominal basis. From the third quarter of 2012 through the end of the second quarter of 2013, approximately $479 billion in taxes were paid by property owners. This was a small increase from the previous trailing four-quarter record of $477 billion, set last quarter.

The modest changes throughout the Great Recession in nominal state and local government property tax collections are due in large part to lagging property assessments and the ability of local jurisdiction to make annual adjustments to tax rates. In general, declining property values are not reflected in the system until a few years after the decline occurs. Once assessments are updated, property tax authorities can adjust rates thus maintaining a desired level of collection. 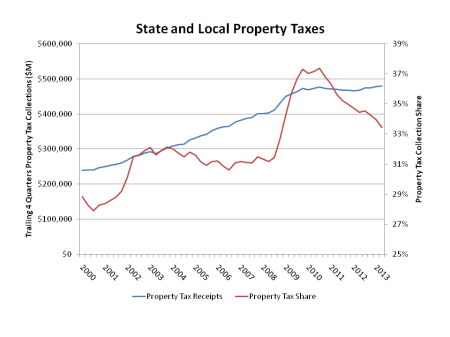