During the second quarter of 2013, household balance sheets improved with increases in home values and reductions in mortgage debt, boosting household net worth. Since the 4th quarter of 2011, the aggregate value of owner-occupied real estate is up nearly $2.8 trillion.

However, while balance sheets in aggregate have mended since the end of the Great Recession, income growth continues to lag. The future of housing demand will be determined by, among other factors, income growth for existing workers and employment opportunities for newly forming, younger households. This will be particularly true as the share of cash buyers for existing and new homes recedes in the year or two ahead. 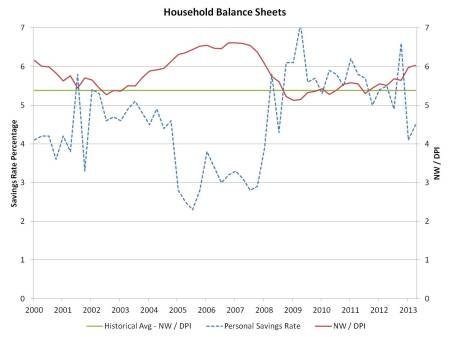 Household balance sheet repair proceeds nonetheless. The graph above plots the current value of net worth to disposable personal income (NW/DPI) and the corresponding 25-year historical average (1982-2007). The dashed blue line charts the personal savings rate. Household net worth data are from the Federal Reserve’s Flow of Funds and the savings rate and disposable income data come from the Bureau of Economic Analysis National Income Product Accounts (NIPA).

After data revisions, as of the second quarter of 2013, the NW/DPI measure stood at a value of 6.03, above the historical level of 5.38 and significantly higher than the cyclical low of 5.13 set during the beginning of 2009. These improvements resulted in pushing the savings rate down after rising during the financial crisis and reducing household consumption. 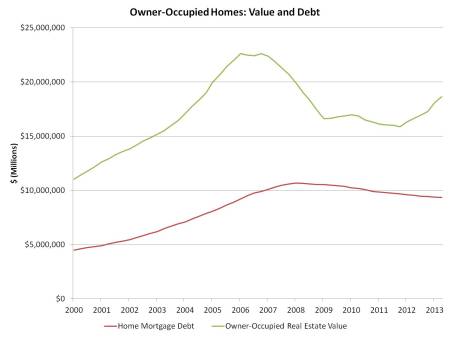 Due to these improvements for household balance sheets, another challenge brought about by the Great Recession is a greater obstacle to future economic expansion: lagging income growth. 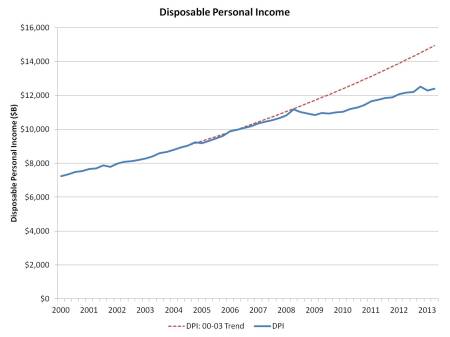 May 19: HBA of Greater Baton Rouge