Total townhouse construction increased slightly on a year-over-year basis during the second quarter of 2013, per Census data of Starts and Completions by Purpose and Design.

Using a one-year moving average, the market share of townhouses now stands at 12.5% of all single-family starts, up from 11.2% for the second quarter of 2012. However, this share is down slightly from the first quarter of 2013, which set a post-recession cycle high of 12.7%. 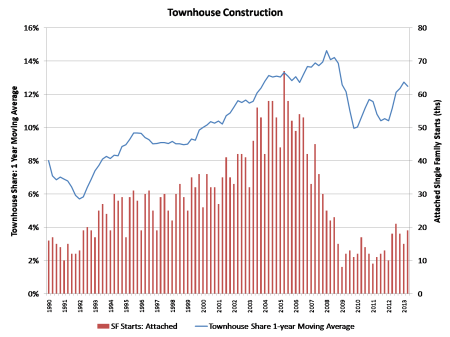 The peak market share of the last two decades for townhouse construction was set during the first quarter of 2008, when it reached 14.6%. This high point was set after a fairly consistent increase in share beginning in the early 1990s.

Despite the drop in market share during the Great Recession, I expect the share for townhouse construction to increase in coming years with occasional ups and downs. For example, the market share may dip somewhat in the near term, given the ongoing rebound in the overall single-family construction sector.

Nonetheless, the prospects for townhouse construction are positive given large numbers of homebuyers looking for medium density residential neighborhoods, such as urban villages that offer walkable environments and other amenities.