Single-family starts built-for-rent were down sharply on a year-over-year basis, falling to only 5,000 starts for the second quarter of 2013 compared to 9,000 a year prior. While the market share of built-for-rent single-family units remains elevated, the share appears to be declining off post-Great Recession highs.

According to data from the Census Bureau’s Quarterly Starts and Completions by Purpose and Design, the market share of single-family homes built-for-rent, as measured on a one-year moving average, stands at 5% for the second quarter of 2013. This remains significantly higher than the historical average of 2.8%, but is down from the 5.8% registered in the first quarter. 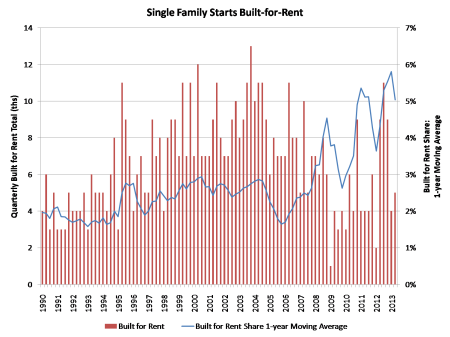 With the onset of the Great Recession, the share of built-for-rent homes rose, with a dip in the percentage during the homebuyer tax credit period.

Despite the elevated market concentration, the total number of single-family starts built-for-rent remains fairly low – only 29,000 homes started during the last four quarters.