The number of markets that continue to show improvement increased to 263 or 73 percent of all markets measured. The June NAHB/First American Improving Markets Index counts the number of metropolitan areas that have seen at least six months of improvement in single-family housing permits, house prices and employment. The index is up 5 from May which had dropped 15 markets from April, the first significant drop since the same time last year.
The net change of five was the result of 29 additions and 24 dropped. As the index and list of markets satisfying the criteria reaches three-quarters of all markets, the places that just made the list with small increases in one of the three indicators can relapse and cause the market to fall off the list just as similar small improvements add markets to the list. Of the 24 markets that fell off the list, 19 had a fall back in house prices. In the preceding month, those 19 averaged 3.8 percent price improvement while all the markets on the May list had an average 7 percent increase at that point.
Over the history of the index 335 metropolitan areas have been on the list, or 93 percent of all eligible. The list is likely to continue seeing nearly equal numbers added and dropped as the economic and housing revival has spread to most markets but some marginal improvements get reversed. 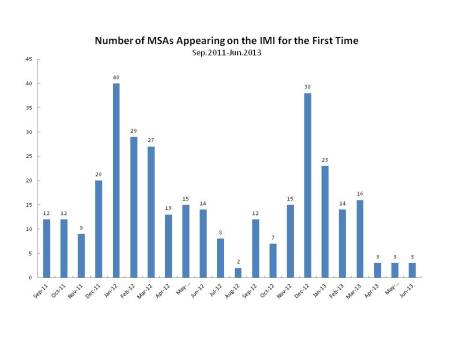