May housing starts rose 6.8% as apartment construction rebounded from an unusually low April and single-family construction remained virtually even. Total starts at a 914,000 seasonally-adjusted annual rate (SAAR) have been above 900,000 for three of the last five months.

Regionally, the South was the only region with an increase in single-family starts (12.2%) while the Northeast dropped 20%, the Midwest dropped 15% and the West dropped 4%. Issued but unused single-family permits were up by double-digit percentages in all three of the regions with a drop in starts. Stock piling permits along with above average precipitation in those same regions suggests single-family starts were held back by wet weather.

Total permits were down 3.7% but also due to an out-of-bounds April figure for apartment buildings and a more normal rate of 352,000 permits (SAAR) for May. Single-family permits increased by 1.3% to 622,000 (SAAR), the highest since May 2008. No region experienced a decline.

The May housing construction report provides evidence that the housing market continues its modest growth path toward recovery as buyers trickle back into the market and builders deal with an industry reassembling itself after a seven year hiatus. 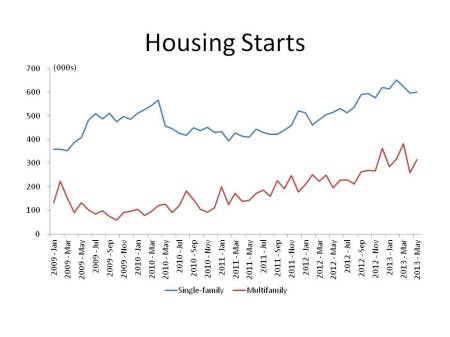