The Federal Reserve Board released the latest results from the Senior Loan Officer Opinion Survey on Bank Lending Practices (SLOOS). Responses to the April survey indicate that mortgage lending is expected to rise over the coming year, but certain risks could derail its recovery.

In each survey iteration, the SLOOS asks senior bank officers to assess their business and consumer lending activity, providing information on the change in both their bank’s lending standards and in demand for various bank products. In addition to these routine questions, the SLOOS will also include a set of special questions that address developments in banking practices of timely interest.

Although Chart 2 shows a relatively sizeable net share of bank officers cited guarantee fees, a high volume of applications that exceeds processing capacity, and servicing costs upon borrower delinquency as having increased in the past year, these factors are near the bottom in terms of their importance for mortgage lending as shown in Chart 3. Conversely, while a relatively smaller net share of bank respondents cited the economic and housing outlook, mortgage insurance, and investors’ appetite for private-label securitizations as having increased over the past year, these factors are relatively more important to mortgage lending than guarantee fees charged by GSEs, a high volume of applications, and servicing costs upon borrower delinquency. 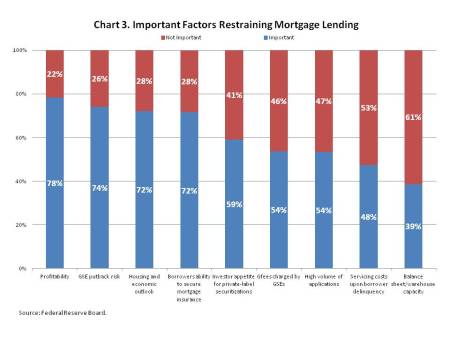 ‹ Number of Open Construction Jobs Remains Elevated
Do It Yourself or Hire a Professional? ›