For the construction sector, Job Openings and Labor Turnover Survey (JOLTS) data from the Bureau of Labor Statistics (BLS) indicate that gross hiring in construction totaled 345,000 in February 2013. Hiring for the sector has exceed 300,000 per month for 23 of the last 25 months. 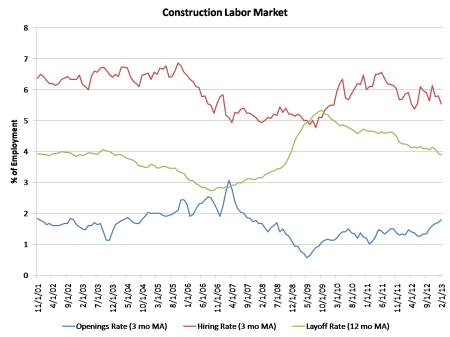 More importantly, the number of open positions in the construction industry reached a post-Great Recession high in February. The number of unfilled positions in the sector reached 116,000 in February, in addition to an upward revision for January. The February measure of unfilled jobs is the highest for the construction sector since September of 2008. Successfully filling open positions with qualified workers is a top concern for home builders in 2013.

The job openings rate (open positions measured as a percentage of current employment) for construction in February (2%) was the highest since May 2008. Measured as a three-month moving average, the openings rate (the blue line above) has shown noticeable strength for the last seven months. Combined with a declining sector layoff rate (nonseasonally adjusted), charted as a 12-month moving average in the graph above, these factors suggest good news for construction hiring in the months ahead.

Monthly employment data for March 2013 (the employment count data from the BLS establishment survey are published one month ahead of the JOLTS data) indicate that total employment in home building stands at 2.122 million, broken down as 578,000 builders and 1.544 million residential specialty trade contractors. 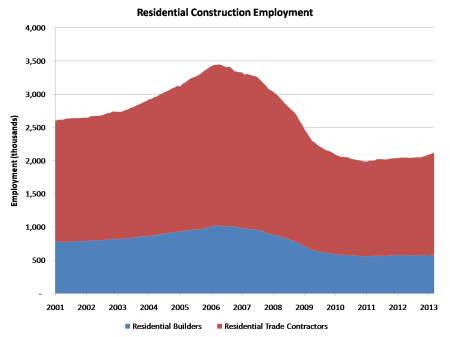 According to the BLS data, over the last 12 months, the home building sector has added only 78,000 jobs. Since the point of peak decline of home building employment, when total job losses for the industry stood at 1.466 million, 138,000 positions have been added to the residential construction sector.

An outstanding puzzle remains the fact that the increase in building has outpaced employment growth for the industry. This could be due to increased hours for existing workers, but if true, it is not a sustainable situation. Expected increases in building should lead to significant growth in home building employment in 2013.

For the economy as a whole, the February JOLTS data indicate that the hiring rate increased to 3.3% of total employment. The hiring rate has been in the 3.1% to 3.4% range since January 2011. The job openings rate  also increased, to a rate of 2.8% in February, the highest since June 2012.