The seasonally adjusted homeownership rate remained unchanged at 65.3% during the final three months of 2012. For the year as a whole, the homeownership rate averaged approximately 65.5%–the weakest calendar year average since 1996. Homeownership rates declined across all age groups compared to the fourth quarter of 2011; however, the largest year-over-year decline occurred among households headed by a person aged between 35 and 44 years. In fact, the newest reading is down nearly two percentage points and has fallen to a new all-time recorded low of 60.4%. 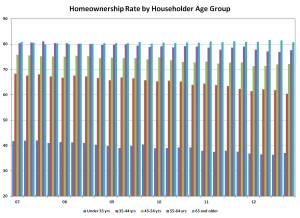 While all householder age groups have seen homeownership rates contract from mid-decade peaks, the overall decline registered by the 35-44 year cohort has been the largest. Indeed, the homeownership rate for this age group has plunged nearly 10 percentage points below its peak level observed in mid-2004. By comparison, the homeownership rate among households headed by a person aged 65 years and older has remained above 80% for the wide majority of quarters over the past three years.

Even though the trend in homeownership among younger households is a notable downside risk for long-term housing demand should it prove difficult to reverse, the 45-54 and 55-64 cohorts will likely have a more immediate impact to the outlook. These two age groups constitute the largest blocks of homeowners and are considered key sources of “move-up” demand, trading their existing homes for newer and/or larger living spaces. The rate at which these households become homeowners versus renters will be a key variable to watch going forward.

In addition to reporting the homeownership rate, the Census Bureau report provides an estimate of the vacant owner and renter housing stock. The rental vacancy rate inched slightly higher during the fourth quarter of 2012 to 8.7%, but remains 70 basis points lower compared the same period a year ago. While rental vacancies increased slightly, the homeowner vacancy rate remained steady at 1.9% to close out 2012, tying the third quarter for the lowest vacancy rate since late 2005. 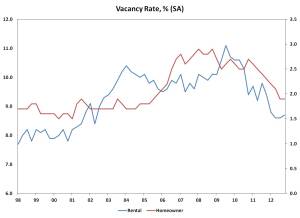