With the end of 2012 approaching, we here at NAHB’s Eye on Housing thought we would take a look at the updates that attracted the most readers over the last year.  In August, we took a look at the housing markets with the lowest vacancy rates.

A simple measure of tightness in a market for owner-occupied housing is the homeowner vacancy rate (number of homes for sale divided by the number either for sale or owner-occupied). Builders are often interested in markets that are tight by this measure, because it indicates prospective buyers will have difficulty finding a suitable home among the available existing units.

Several federal government surveys provide homeowner vacancy rates, but the one with the greatest geographic detail by far is the Census Bureau’s American Community Survey (ACS).  In a recent study, NAHB tabulated the most recent (2010) ACS this data for all metropolitan areas in the country.

Because it may seem difficult to compare these areas to larger markets, NAHB also looked separately at the 27 metropolitan areas that have at least 500,000 owner-occupied homes.  Homeowner vacancy rates for these 27 areas range from 1.43 percent to 4.65 percent.  The ten tightest large markets are shown below. 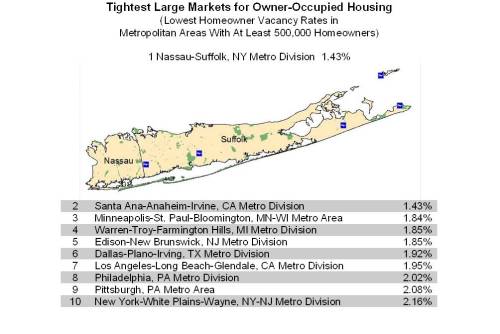 The NAHB study provides a rundown of the top-10 metros according to nine key measures, including: owner-occupied housing units; homeownership rate; home owner vacancy rate; share of single-family detached homes; value of homes owned; home owner incomes; growth in stock of single-family detached homes; and share of homes built recently. It also has a spreadsheet that shows how more than 350 other metro areas stack up in each category.