The Bureau of Labor Statistics reported that the Consumer Price Index for Urban Consumers (CPI-U), a measure of inflation, slowed in the month of October to 0.1% on a seasonally adjusted basis. In August and September, the same measure rose by 0.6% per month. The deceleration in the CPI-U largely reflects a 0.2% decline in energy prices from 5.6% growth in August and 4.5% growth in September. The graph below shoes that the difference between top-line and core inflation is mainly energy price inflation. 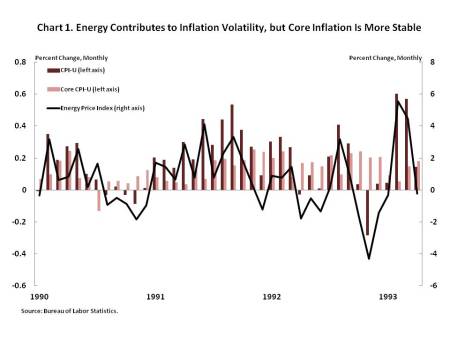 Although the fuel oil price index rose by 1.1% in October, the gasoline index fell by 0.6%. Meanwhile, food prices increased by 0.2% in October accelerating from the 0.1% rate of inflation in September as the food at home index, which was unchanged in September, grew by 0.3% in October. Over the twelve month period ending in October 2012, the CPI-U rose by 2.2% before the seasonal adjustment.

While headline inflation slowed in October from its pace in August and September, core CPI-U accelerated. Core CPI-U, which excludes volatile food and energy prices and is considered a better representation of the underlying fundamentals in the price level, grew by 0.2% in October.  In September, core CPI-U rose by 0.1%. Acceleration in core-CPI reflected a 0.3% increase in the shelter index. However, the price increase in the shelter index, which accounts for 41.4% of core CPI-U and 32.0% of CPI-U, were partially offset by price declines in the indexes for new and used vehicles. Over the twelve month period ending in October 2012, core CPI-U rose by 2.0% on an unadjusted basis.

‹ Fed Chairman Bernanke on Mortgage Lending
Buying Products for Home Building and Remodeling: Who and Where ›