The Geographic Distribution of Households with Nonrelatives

A component of pent-up housing demand is the situation of collapsed households — individuals who reside with another household. From a data perspective, we can identify some of these households by estimating the number of housing units that contain individuals who are not related to each other. This is just a part of pent-up demand of course, as it excludes adult children who live with parents or other relatives. 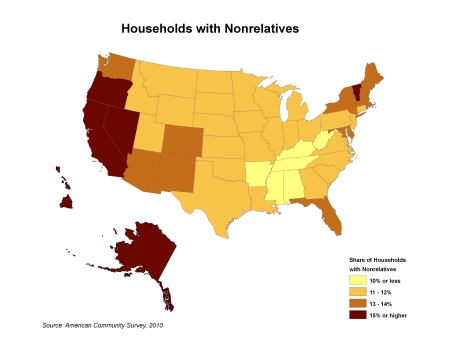 Data from the 2010 American Community Survey allow us to map the geographic distribution of the households with nonrelatives. The shares of such households are highest in states along the coasts and lowest in the South.

While these data are likely influenced by recent events in the housing markets, they also reflect cultural differences among the states. Households with nonrelatives includes homes occupied by the decidedly unromantic classification of “cohabitating partners.” This may be a more common practice along the West Coast and the Northeast than in parts of the South.

Excluding such couples, yields “shared households,” but unfortunately the ACS data do not allow an easy mapping of that population group, which has been growing as a direct result of the Great Recession.