Both S&P/Case-Shiller (CS) and the Federal Housing Finance Agency (FHFA) released monthly home price indexes for July today. Both organizations reported solid gains in house prices continuing so far this year. The CS 10 and 20 city composite indexes posted 1.5% and 1.6% gains respectively in July over June, bringing the year to date increases to 6.3% and 6.9% (on the non-seasonally adjusted basis they focus on). FHFA reported a less robust 0.2% increase nationally from June to July and a 4.1% increase so far this year (on the seasonally adjusted basis they focus on).

The non-seasonally adjusted data typically shows higher peaks and lower troughs throughout the year due to the highly seasonal nature of the housing sector. It’s also true that historically the CS composites have shown more extreme highs and lows than both the CS and FHFA national indexes. This is due in part to the inclusion of some of the most volatile markets among the 20 cities in the composites, and less averaging out than the national indexes.

All 20 cities in the CS composites posted gains for July, perhaps unsurprisingly given the non-seasonally adjusted data and summer being the height of the selling season. But summer has brought no guarantee of rising prices in these markets in the last few years and the most encouraging signal in this release is that the year to date increases so far in 2012 are stronger than in prior years suggesting this is fundamental improvement rather than pure seasonality. 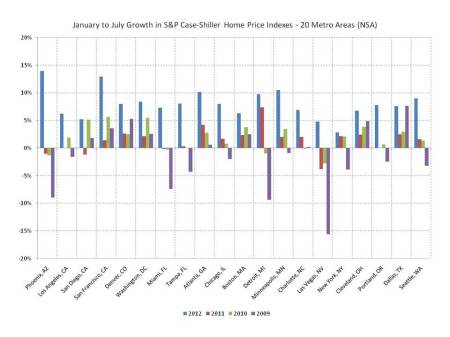 Among the 9 Census divisions reported by the FHFA, 3 posted modest declines for July, but 8 of the 9 have shown good progress so far this year. The Middle Atlantic division, including New York, New Jersey and Pennsylvania, while still positive has the weakest growth of the divisions.

For full histories of the 20 markets included in the Case-Shiller composite, click here cs.

For full histories of the FHFA US and 9 Census regions, click here fhfa9.