The Employment Situation for July – Mixed

The Bureau of Labor Statistics (BLS) released the Employment Situation report for July. The top line numbers show total nonfarm payrolls increased by 163 thousand, with private payrolls adding 172 thousand and government subtracting 9 thousand. Revisions to the prior two months lowered employment by 6 thousand for those months. The unemployment rate ticked up a tenth to 8.3 percent, which the BLS characterized as essentially unchanged.

The report is mixed because while job growth in July was better, it’s still not good. Growth in payrolls more than doubled from June but the pace remains too low and has been inconsistent. And while the unemployment rate increased, it’s more technical than substantive. It comes from a household survey which tracks people employed, unemployed and in the labor force. The uptick this month is based on a swing of 0.04 percentage points. Last month it rounded down, this month is rounded up. So the move is less than it appears. What’s more important is that the unemployment rate is stuck above 8 percent with no appreciable change in recent months.

Whether job growth continues to improve or falls back again will be related to the pace of broader economic recovery, but some insight can be gained by examining how the different sectors of the economy were affected by and are recovering from the recession. Constructing indexes of the level of employment in different sectors of the economy since the recession began at the end of 2007 illuminates where labor market recovery is strongest and weakest. 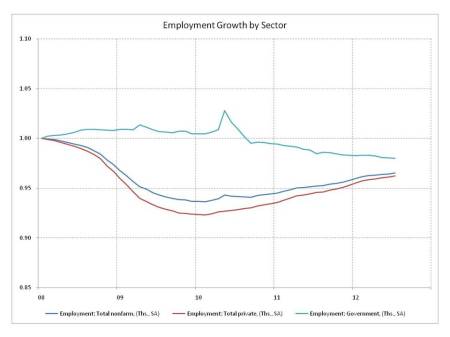 Employment growth in the remaining service industries has been below the sector average. Among these, employment in information services has only recently stopped declining.

Payroll employment declined by 8.8 million in 2008 and 2009. Almost half of that, 4.2 million, was in the goods producing sector. Employment in the goods producing sector has increased by only 624 thousand since then. Construction employment is stagnant. Manufacturing employment is recovering but has a long way to go, and the boom in natural resources and mining industries has peaked. These industries previously accounted for 16 percent of payroll employment (natural resources and mining industries accounted for 1 percent).

In the services sector, of the 4.6 million jobs lost, the three leading industries have added 3.1 million back. Employment in the education and health services continues to grow. But employment in the business and professional services industries and the leisure and hospitality industries has returned to roughly pre-recession levels and growth has slowed.

The service sector industries that are lagging in employment growth previously accounted for roughly one third of payrolls. Employment in the government sector continues to decline and this sector represents another 16 percent of payroll employment.

With a little more than half of the sectors of the economy experiencing such sluggish employment growth the outlook for the top line numbers is uncertain, and the July employment situation is mixed at best.