For the eleventh release , 80 markets are currently classified as improving under a conservative examination of local economic and housing market conditions.  Among these areas is the Victoria, Texas metropolitan statistical area (MSA).

The health of the Victoria housing market is due to near equidistant location from Austin, Corpus Christi, Houston and San Antonio making it the regional hub of South Texas.  Additionally, the growth of both Victoria College and the University of Houston–Victoria, Victoria’s growing position as a regional healthcare, shopping and entertainment center, and its large and growing petrochemical industry have also boosted the local economy.  However, it’s the new 1.3 million sq ft. Caterpillar hydraulic excavator facility and the even more recent and sudden exploitation of the Eagle Ford Shale just north and west of Victoria, due to hydraulic fracking, that are causing Victoria to boom.  Due to Caterpillar a number of suppliers are moving to town and because of the nearby Eagle Ford shale, many oil service firms including pipeline and drilling companies are fast locating nearby.

According to home builder Tony Prokop, President of Prokop Custom Homes, LLC, “because we are one of the biggest cities near the Eagle Ford shale people in the oil and gas industry are moving here from all over the country.  And, since drilling is expected to last well over a decade, these same people are putting down roots and buying nice homes. Due to the fact that there was already a very limited inventory of existing homes before Caterpillar built here, the petrochemical plants expanded and fracking began, the new demand translates directly into strong demand for new upscale housing.”  He went on to say that “it’s also important to note that there are also lots of new homes and second homes being built by landowners who are now getting monthly royalty checks from the oil companies, not to mention all the new cars and boats being sold.”

According to Howard Marek, a partner in the law firm of Marek, Griffin & Knaupp, “business is doing so well we are seriously considering growing the size of our firm.  Hotels are all full, and builders are building new homes in all price ranges.  In addition, because of all the in-migration, more restaurants are opening up and there is talk of other large employers moving to Victoria.  On top of all this, we expect more suppliers to move here, after all Caterpillar broke ground on its initial facility less than 18 months ago.”  Whatever the causes, house prices have held up well over the past few years.  Prices are up 13.5% since the trough in February 2011 and recently surpassed the previous high set in June 2010.

Improving economic conditions have resulted in payroll employment being down just 1.5% from its high of 51,900 set in August 2008 and up by 5.6% since the trough in November 2009.  Single family permitting activity is up 4.7% on a seasonally adjusted monthly average basis from the trough set in September 2010.  While new homes are being built in many parts of the Victoria MSA, activity has been primarily centered south of the city from the Port of Lavaca to Port O’Conner all the way to Rockport, with additional activity northwest of town in Cuero close to the Eagle Ford shale. 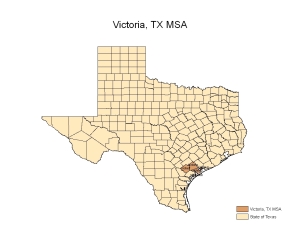