Multifamily Market Absorption Slows at the Beginning of 2012

Data from the Survey of Market Absorption of Apartments (SOMA), produced by the Census Bureau and the Department of Housing and Urban Development, reflect the slowdown experienced for housing during the first quarter of 2012.

It is worth noting that the SOMA data are published with some time lag, and housing indicators have improved since the time period for which the most recent SOMA report covers. The next quarterly SOMA release should show improvement for the multifamily sector.

The SOMA tracks completions and market absorption (units rented or sold after construction of the property is complete) for multifamily rental and for-sale housing in 5+ unit properties. Data released in June report three-month absorption rates during the first quarter of 2012 for properties completed at the end of 2011.

For unfinished apartments, the SOMA data show some softening in rental demand for the early part of the year. The first quarter three-month absorption rate fell back 51%, after reaching 67% during the final quarter of 2011. Completions also fell for units rented during the first quarter, to 15,500 units. 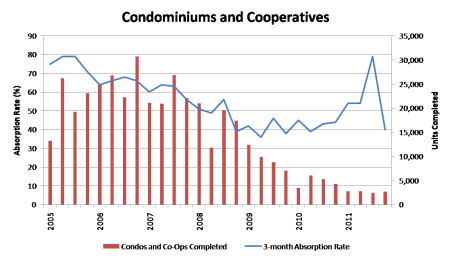 A similar story played out in the for-sale multifamily sector. The three-month absorption rate for units completed during the fourth quarter of 2011 and sold during the first quarter of 2012 fell back to 40%, after a 79% absorption rate at the end of 2011. Completions of for-sale multifamily remain low, totaling 2,700 units that were completed at the end of 2011 and put on the market during the beginning of 2012.

The SOMA data also allow a tracking of the types of multifamily units completed. Notable strength can be seen for Low-Income Housing Tax Credit (LIHTC) and other subsidized affordable housing units, which are up 80% year-over-year for the 4th quarter of 2011. 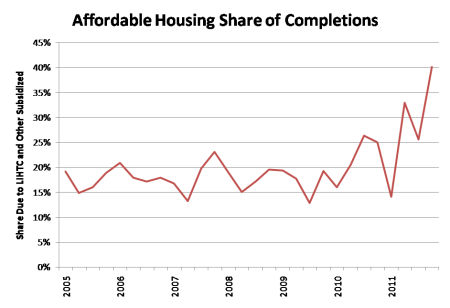 As such, the SOMA data illustrate the importance of the LIHTC program in terms of supporting multifamily construction activity, job creation, and providing affordable housing during the housing crisis. Two critical policy changes ensured that LIHTC related starts did not collapse during 2009 and 2010, and in fact resulted in the share of multifamily 5+ unit completions due to the LIHTC program growing from less than 20% on average to more than 40% for the final quarter of 2011.

First, the LIHTC exchange program, enacted by the 2009 American Recovery and Reinvestment Act stimulus legislation, ensured equity was available for the LIHTC program. Second, the 2008 Housing and Economic Recovery Act temporarily fixed the LIHTC new construction credit at a 9% rate (absent the legislation, the credit rate would be at approximately 7.4% today, resulting in less affordable housing investment funding).

This second item is important to note because the fixed 9% rate has effectively expired and efforts are underway to ensure that it is extended.

‹ Profile of the Typical Single-Family Builder
Credit Conditions for Builders May Be Stabilizing, But Remain Tight ›