A recent study commissioned by HUD used the American Housing Survey (AHS, funded by HUD & conducted in odd-numbered years by the Census Bureau) to look at how the stock of housing in the U.S. has evolved to serve different segments of the market over time.  The study found that 23.8 million of the homes present in 2009 had switched back and forth between serving owners (being either owner occupied or vacant for sale) and renters (renter occupied or vacant for rent) at some point since 1985.  This is considerably fewer than the 54.2 million units that had been for owners consistently, but more than the 18.3 that served the rental community continuously during that span: 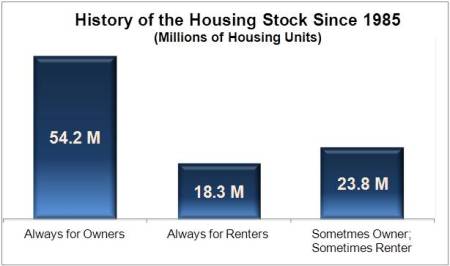 The remainder of the 129.7 million housing units not shown in the above graph were either seasonal or had some other kind of mixed history (renter/seasonal, owner/temporarily out of the stock, etc.)

The HUD study also used statistical models to show how various attributes of a home affect its chances of having a mixed owner/rental history.  The chart below shows how fewer bedrooms, an earlier vintage, and a location in the West Census Division alter the chances for a  base case 2-bedroom single-family detached home, built in the late 1970s in a Southern central city:

To conduct the study, HUD commissioned Econometrica, Inc. of Bethesda Maryland to employ a special data file that traces what happened to individual housing units across all 13 installments of the AHS conducted between 1985 and 2009.  The most common career path for the mixed own/rent cases was a housing unit that served renters in 1 survey and owners in 12, followed by a unit that served renters in 2 surveys and owners in 11.

The fragile and temporary attachment of some units to the rental stock has significant implications for U.S. housing markets.  An apparent surplus of rental units on the market may disappear quickly if the rate of renter-to-owner conversions accelerates with changing economic conditions.

The study also illustrates the importance of continuing to fund and conduct the AHS, as there is no other national data set that can trace how individual housing units evolve to serve different segments of the market over time.