House Price Reports for February – Too Close To Call

Both S&P/Case-Shiller (CS) and the Federal Housing Finance Agency (FHFA) released monthly home price indexes for February today. The FHFA released data for the US and the 9 Census divisions, based strictly on February transactions. CS released data for their 10 and 20 city composites, and the component cities, based on three month averages including data from December through February. 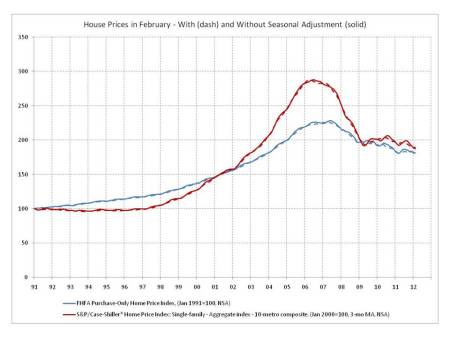 Regionally, the FHFA data show 5 of the 9 Census divisions posting monthly increases when seasonally adjusted, and 6 of 9 increasing on an unadjusted basis. Both increases and declines were in a modest range. From a broader perspective, the Pacific division and to a lesser extent the Middle Atlantic division, continued to trend down while the remaining divisions continued to hover near 2011 levels.

The CS data show a similar pattern with most markets moving in a narrow range, but the results are highly dependent on the seasonal adjustment. Without it, only 3 of the 20 markets show monthly increases. With seasonal adjustment, 12 of the 20 markets show monthly increases, indicating that measured declines in some markets are the result of seasonal slowdowns during the winter months, rather trend based declines.

Notable developments outside these bubble markets include accelerating weakness in the Atlanta market, and continuing trend-like declines in Chicago, New York, Portland and Seattle. The remaining markets included in the CS 20-city composite show prices consistent with 2011 levels, moved mainly by seasonal variation.

For full histories of the 20 markets included in the Case-Shiller composite, click here cs.

For full histories of the FHFA US and 9 Census regions, click here fhfa.

‹ New Home Sales: Up or Down?
Pending Home Sales Increase ›