The Conference Board’s Consumer Confidence Index (CCI) and the University of Michigan Consumer Sentiment Survey both pointed to consumer confidence remaining generally unchanged between March and April 2012. Nonetheless, viewing the overall indexes from both surveys using a 3-month moving average, one can still see an appreciable increase in consumer confidence since the third quarter of last year. The current and expected conditions indexes for each survey moved in opposite directions this month, but once again consumers are tending to view current economic conditions and their expectations for conditions 6 months hence more optimistically. 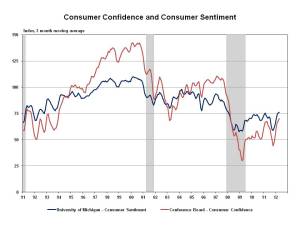 Consumers’ perceptions of the labor market have also shown signs of improvement. Although the pace of net payroll growth slowed to 120,000 in March, the average monthly pace during the first quarter reached its highest level since 2006. A majority of respondents to the CCI still characterize jobs as “not so plentiful”, but at the same time the share of consumers reporting that jobs were “hard to get” dropped to its lowest reading since late 2008. Unfortunately, consumers still maintain a cautious eye toward making a home purchase; while the relative buying conditions are considered strong, thanks to softer pricing and extremely low mortgage rates, less than 1% of the CCI’s respondents plan to buy a new home within the next 6 months.