New home sales annual rate topped 321,000 in January 2012 and except for December’s revised figure of 324,000, this is the highest level since the end of the home buyer tax credit in April 2010. The month-to-month rate fell less than 1 percent but that was due to the upward revision in December’s rate.
Sales increased 11 and 9 percent respectively in the Northeast and South but were down 25 and 11 percent in the Midwest and West regions. The South’s level of 188,000 (seasonally-adjusted annual rate) was also at a level of sales not seen since the end of the home buyer tax credit.
The inventory of new homes for sale established another record low at 151,000 homes, which represents a 5.6 month supply at current sales rate. Anything below a 6 month supply is considered very healthy and could indicate a shortage in some places. The number of completed homes for sale also reached a new record low of 57,000 homes.
The median sales price fell almost 10 percent from January 2011 to $217,600 but that may be due to the increase in sales in the South where homes are less expensive and to an increase in the proportion of homes sold in the lowest price range.
The modest trend increase in new home sales aligns with similar increases in existing home sales, new single-family home starts and permits and more general economic trends such as GDP, employment and consumer confidence improvements. The continuing but relatively slow improvement will result in a forecast of 360,000 new home sales total in 2012. 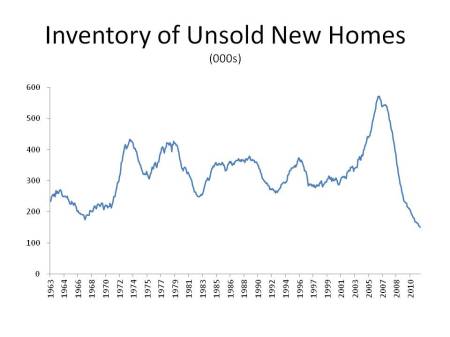