The NAHB/Wells Fargo Housing Market Index rose to 25 in January, the highest reading since June 2007. This marks the fourth consecutive monthly increase for a total change of 11 points and the largest four month increase since 2003. All three components increased and all four regions showed positive change. Except for the Northeast, regional levels were last this high in 2007 and current sales and traffic are back to levels last seen in 2007. Expectations for future sales were the highest since mid-2009. The consistency of increases across all components and regions reinforces the solid index increase as a solid observation rather than single aberration. Other housing indicators, e.g. starts, permits, home sales, have also shown more consistent albeit small positive moves in the last several months. While these indicators are all modest by themselves, together they provide a sounder base for continued slow improvement in housing than we have seen in the recovery so far.
In a separate question about builders’ greatest problems faced in 2011, the lead concern is buyers’ inability to sell their current home, followed by the current employment and economic situation, regulation of financial institutions and competition from distressed home sales. Builders cited two significant concerns in 2011 that they expect to see get even worse in 2012: regulation of financial institutions and gridlock in Washington. 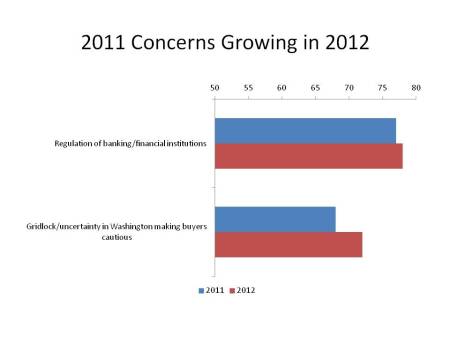 ‹ Federal Open Market Committee Minutes: A Glimpse Behind the Curtain
Producer Prices in December – A Flat End to the Year ›