Spending on private residential construction projects jumped 3.4% during October. The initial estimate for September was also revised higher, shifting from a gain of 0.2% up to 0.6%. Even with these recent improvements, total private residential construction spending has failed to gain any considerable forward momentum in the past year, with modest growth of only 1.7% rate versus October 2010.

New single-family housing notched its fifth consecutive month-to-month increase in spending with a 0.6% gain in October. In addition, this category registered a 1% improvement over October 2010 levels, representing — the first year-over-year increase in 13 months. This improvement is consistent with recent data pointing to stabilizing house prices and improving homebuilder optimism. However, the single-family housing market continues to struggle, constrained by tight mortgage loan standards, still-high competition from distressed properties and a meager job market recovery. 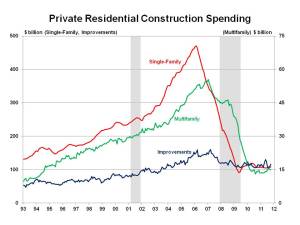 Private nonresidential construction activity jumped 1.3% during October, but the initial September estimate was revised downward from a 0.3% gain to a modest 0.1% decline. Commercial buildings and manufacturing facilities have experienced a steady recovery in spending activity over the course of 2011, but outlays on lodging and office properties continue to hover near cyclical lows. Public-sector construction spending declined 1.8% in September, with the most notable decline occurring in the educational buildings category. Outlays on highway and street projects fell slightly, but on a year-over-year basis spending has declined more than 8%, possibly as a result of budgetary strains at the state and local government level.