NAHB has been tracking two key economic variables that are critical for a robust and sustainable rebound in housing and the economy as a whole: the ratio of household net worth to disposable income (NW/DPI) and the personal savings rate.

The NW/DPI ratio can be thought of a measure of the health of household balance sheets. It tells us how much household wealth exists relative to available income. Over the last 25 years, this measure has averaged about 5.17 (i.e. households, in aggregate, typically possessed total wealth equal to their current disposable income multiplied by 5.17). In late 2006, this ratio peaked at a value of 6.45. It then fell to 4.68 at the beginning of 2009, as housing price declines and stock market declines took a toll on household wealth. 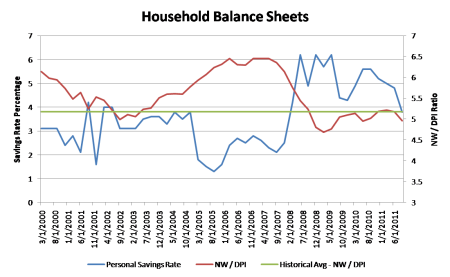 The graph above plots the current value of NW/DPI (red line) and the 25-year average (1982-2007) (green line). The blue line charts the personal savings rate. Household net worth data are from the Federal Reserve’s Flow of Funds data and the savings rate and disposable income data come from the Bureau of Economic Analysis National Income Product Accounts.

Household balance sheet repair, meaning household deleveraging as families pay down debts and build up savings, in general continues as seen by the gradual upward trend of the NW/DPI since early 2009. However, there have been ups and downs in this process, which is crucial for successfully emerging out of a balance sheet recession. We are currently experiencing an extended down period given recent stock market declines. As of the end of the third quarter of 2011, NW/DPI currently stands at 4.86 (plotted on the right axis).

The most significant reason for this weakening in balance sheets was the decline in the stock market during the third quarter of 2011. For example, the S&P 500 was down almost 16% for the quarter. As a result, total holdings of household financial assets declined by almost $2.7 trillion or more than 5%. It is useful to note that homeowner equity, which has been approximately constant through 2011 due to relative stabilization in home prices, was not a significant cause of the weakening of balance sheets.

This stumble in household wealth occurred just after, under the revised data, household balance sheets reached their historical average in the first quarter of the year. Consequently, the savings rate fell significantly, from 5% to 3.8% in the third quarter (despite some predictions from more pessimistic observers that the rate would increase in 2012 to 8% or higher). This decline certainly boosted consumer spending. In fact, personal interest payments (non-mortgage interest payments on debt) rose in third quarter for the first time since late 2007, according to the NIPA data.

However, because household balance sheet conditions declined over the last two quarters, we expect the savings rate to increase somewhat during the last quarter of 2011. This negative effect should be offset somewhat by recent recoveries in stock prices, with the S&P 500 up 10% over the last two months. If balance sheets continue to improve at the post-2009 trend, then they will return to the historical average in by the middle of 2012. This forecast suggests that the savings rate will remain between 3% and 5% for the first part of 2012.

Finally, data from the third quarter Flow of Funds show that total home mortgage debt outstanding continues to decline. Since the first quarter of 2008, mortgage debt has declined 6.9% or $730 billion. However, the value of the owner-occupied housing stock has fallen by 20% over the same period. As a result, the share of equity relative to the total value of the owned-occupier housing stock has remained around 40% over the last three years.