House prices remained steady in October, with the Federal Housing Finance Agency (FHFA) reporting a slight 0.2% (SA) decrease in the monthly purchase-only house price index (HPI). This follows a revised 0.4% increase in September. Despite some minor month-over-month variability, the index has exhibited a slight upward trend since April. The decline following the expiry of the homebuyer tax credit is now in the rear-view mirror, but continues to be observed in the annual change, with the index remaining 2.8% (NSA) below its October 2010 level. Nonetheless, this is a marked improvement on the 6.1% year-over-year decline observed in April. 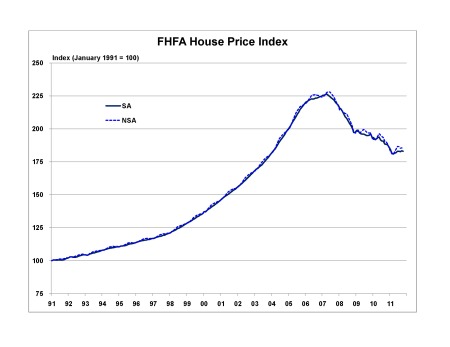 While the general trend in October was to give back some of the gains from the previous month, overall the Census divisions have either shown modest improvement or remained flat since April.

As the charts show, the HPIs in West North Central, East North Central, East South Central and South Atlantic divisions have made moderate gains since April, while the indexes for Pacific, Mountain, West South Central, Middle Atlantic and New England divisions have remained flat over the past six months. The state-level HPI data are only provided quarterly, but the recent improvement in house prices by state can be observed by following this link.

The slight upward trend observed in the FHFA HPI over the past six months has been mirrored by the Case-Shiller composite HPIs, confirming that house prices have stabilized. We expect house prices to remain relatively flat, with no further significant declines, over the remainder of 2011, and anticipate steady, albeit modest, gains through 2012 and 2013.