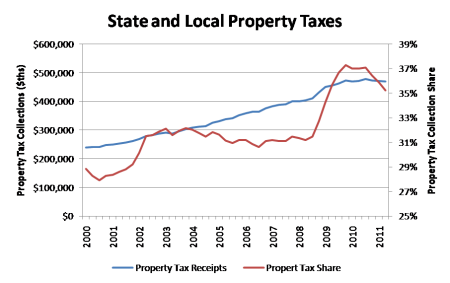 Moreover, as the chart above demonstrates, the share of state and local government tax collections due to property taxes continues its decline, falling to 35% in the second quarter of 2011. However, it is important to note that this share remains relatively high compared to recent history. The average share since the year 2000 has been 32%, so housing and other real estate owners are still paying a higher than average contribution of state and local government tax receipts. 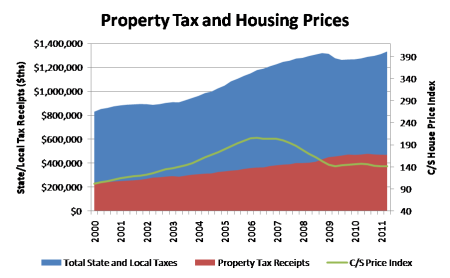 This elevated tax burden is significant, especially when one considers the decline in housing prices since 2006. According to the Case-Shiller house price index of the 20 largest metropolitan areas, housing prices are down almost 32% over the last 5 years. Yet the decline of property taxes paid is negligible thus far (1.8%). This means that the effective tax homeowners pay on their homes remains high. However, as assessments catch-up to accurately reflect current fair market value of owner-occupied homes, property taxes are expected to decline both in terms of the total amount paid and the share of all taxes collected.

And despite the recent decline in the share of total taxes due to property tax, taxes paid by homeowners and other real estate owners remain the largest single source of taxes for state and local governments. At 35%, property taxes represent a significantly larger share than the next largest source: sales and gross receipt taxes at 23%.

Given the ongoing weakness in housing due to the lack of robust job creation and tight credit conditions, recent declines in property tax collections for state and local governments emphasize the importance of housing for the U.S economy. Federal policies that would weaken housing prices by undermining demand would not only affect homeowners and would-be homebuyers, but such proposals would also harm the largest revenue source for state and local governments, a source that is expected to diminish as assessments continue to fall.

*Data footnote: the Census data for property tax collections include taxes paid for all real estate assets (as well as personal property), including owner-occupied homes, rental housing, commercial real estate and agriculture. However, housing’s share is by far the largest when considering the stock of both owner-occupied and rental homes.