The new single-family home category posted its fourth consecutive month-to-month gain during September, rising 0.5%. However, homebuilding activity can, at best, be characterized as bouncing along the bottom. Outside of the jump in spending created by the homebuyer tax credit, the level of new home construction has moved sideways for the past two years; held back by competition from distressed sales, tight lending standards and a still-weak labor market. 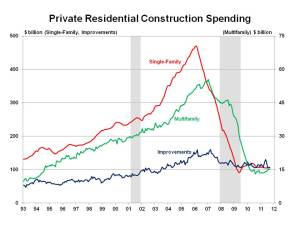 Home improvement spending jumped 1.4% in September. Shorter-term readings in these data suggest a great deal of volatility in spending activity, but the longer-term trend suggests home remodeling activity has been flat over the past two years. Results from the NAHB Remodeling Market Index indicate the market for home improvement is being held back by the sluggish economic recovery and restrictive lending standards.

Spending on private nonresidential structures increased 0.3% in September, with appreciably higher outlays on health care and transportation categories offsetting slightly weaker readings on commercial and office buildings as well as power plants. Public-sector construction spending fell 0.6% in September, led by a 4.7% decline in air and mass transit. Educational buildings (-0.9%) was the only other major category to see spending weaken on a month-to-month basis. Outlays on highway and street projects climbed 1.4%, but infrastructure spending remains hobbled by budgetary concerns. State and local government spending on this category declined 4.8% on a year-to-date basis.