The November NAHB/Wells Fargo Housing Market Index rose three points to 20 from a revised October level of 17. The November increase follows a similar three point increase from September to October. The combined six-point gain in two months is the largest two month increase since May 2010 when the home buyer tax credit was about to expire.
All three components of the index rose, including a two point increase in expectations and a three point increase in current sales. Three of the four regions increased. The West region fell to 15 but that was likely a correction from an unusually large jump to 21 in October. The November level in the West is still three points above the September level.
The comments from most builders remain negative but a growing number of builders, albeit still in the minority, see improvement in buyer interest especially among trade-up buyers. Other evidence of this new trend includes a rise in the share of new homes sold in the $200,000 to $300,000 range and an increase in new homes with four or more bedrooms, three or more baths and in total square footage. These trends suggest without explicit evidence that the first time home buyer influence in the new home buying market may be waning while the move-up buyer is beginning to affect the homes built and sold.
Builders have been telling us that their buyers continue to have difficulty obtaining permanent financing. Given the increased demand for larger down payments and lower payment-to-income ratios, it is possible that the first time home buyers who traditionally have difficulty saving for a down payment and have lower incomes may be hitting qualification barriers. At the same time, the households that already own a home but have been waiting for some improvement in the market are beginning to trade homes. Many of these first move-up households have postponed moving as their families and incomes grew and as their need for different locations or neighborhoods changed. They are now taking advantage of historically low mortgage rates, affordable house prices and some modest improvement in local economies.
If this dynamic is occurring, builders will have to start more homes to meet the demand but the limited supply of production credit to builders could suppress the trend. The latest NAHB survey of production credit availability shows little improvement in credit access for builders. 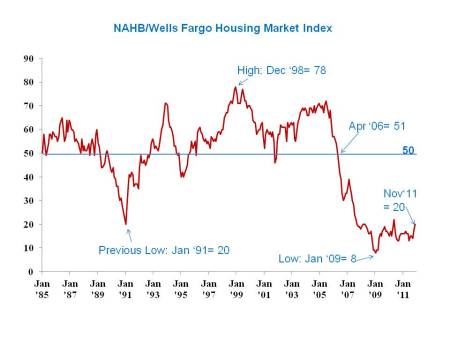