The October NAHB/Wells Fargo Housing Market Index increased four points to 18 from 14 in September. This is the highest the index has been since the end of the home buyer credit in May 2010 and the largest one month jump since April 2010. The increase occurred in all three subcomponents with expectations for the next six months rising from 17 in September to 24 in October, the largest jump since April 2009 when single-family construction was pulling out of a record low point.
The indicator for current sales rose four points from 14 in September to 18 in October, the highest since May 2010 when the home buyer tax credit expired for signing a sales contract. The traffic indicator rose three points to 14 from a nine month low of 11 in September.
Comments from builders continued to emphasis competition from the lower prices for foreclosed and short sale homes combined with increasing price pressures on building materials. As a result, profits are thin and competition intense.
Regionally, the HMI remained steady in the Northeast, rose four points in the Midwest and South to 15 and 19 respectively and increased nine points in the West to 21, the highest level since August 2007. The West increase is the result of more builders switching their responses from poor to fair rather than a significant boost in those rating the market as good. The Census Bureau August housing starts reported a significant increase in homes completed in the West, suggesting the builders were preparing a larger share of the homes under construction into a ready-to-occupy state in anticipation of improved sales.
Builders also responded to questions about appraisals, which have shown no appreciable improvement over the last two years that NAHB has posed the question. One-third of the builders lost a home sale because the appraisal was below the contract price. More appraisals are below the contract price (60%) than above. 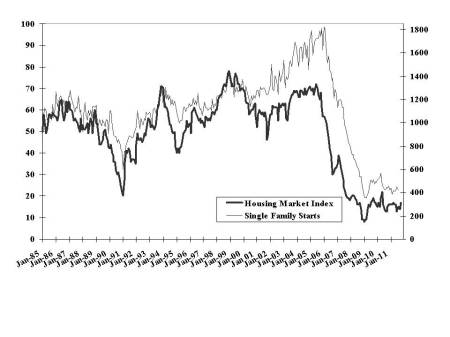