A new special study from NAHB economist Paul Emrath examines an online tool  from the National Institute of Standards and Technology (NIST) to calculate the costs and benefits of residential fire sprinkler installation. The Sprinkler Use Decisioning (SPUD) tool comes equipped with fire probability and other statistics for the nation as a whole but may provide inconclusive results for some users.

The study demonstrates how strongly cost-benefit comparisons for sprinklers depend on certain values chosen for three particular inputs: the value of a statistical life, the time-frame considered, and the upfront cost of the sprinkler system.

Estimates of the “value of a statistical life” used by government agencies vary widely, from $5 million by the U.S. Consumer Product Safety Commission, to $6 million by the Department of Transportation, to $9.1 million by the Environmental Protection Agency.

For timing, previous studies from NIST have separately used a short-time period (9 years) to discount costs and longer time periods (30 years) to discount benefits. A consistent analysis should use the same time period, with Emrath noting that NAHB analysis of the American Housing Survey indicates that the average single-family homeowner remains in their home for about 12 years.

Upfront cost is  another important input variable. Emrath notes that the average cost builders pay for a sprinkler system in the National Fire Protection Research Foundation‘s 2008 study, “Home Fire Sprinkler Cost Assessment,” is roughly $6,300, but the costs of the 30 systems in the sample ranged from $2,386 to $16,000. The average sprinklered space among the homes in the sample of that study was 4,118 square feet, which may sound large, but basements are usually included, and it is common for garages, often large, and attics also to have sprinklers. The study found that the average cost of sprinklered space was $1.61 per square foot .

However, Emrath writes that the emphasis on cost per square foot can be awkward and misleading in some applications, especially if assumed to be constant across homes of different sizes. Using the data from the study, Emrath shows that the average cost of fire sprinkler installation declines as the size of the sprinklered space increases.

Mindful of these complicating factors, Emrath uses the SPUD to estimate the net benefits of home fire sprinkler installation under reasonable assumptions.  The table below presents those results (click on the table for a larger version). 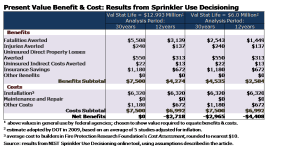 On a net basis, the NAHB study finds that it is relatively difficult to show that sprinklers costing $6,000-$7,000 are economical using the NIST online cost-benefit calculator.