The two surveys that are watched most closely to gauge consumer confidence, the Conference Board’s Consumer Confidence Index (CCI) and the University of Michigan Consumer Sentiment Survey, both reported slight increases. Both surveys registered gains in the expectations component, but the results for current economic conditions were mixed as the CCI suggested present economic conditions were weaker versus last month. Unfortunately, despite the increases realized for each index, both remained at levels close to those observed during the worst part of the recession. These results continue to illustrate that consumers remain gravely concerned about the staying power of an already lackluster economic recovery. 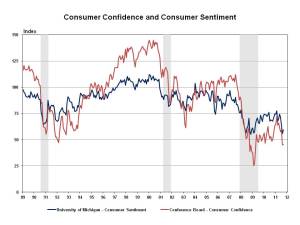 While the debt-ceiling debate certainly weighed on the average consumer’s perceptions of the economy in August, this effect likely faded into the background during September. Indeed, no appreciable job growth and a stubbornly-high unemployment rate continue to weigh on the consumer’s psyche and are overpowering the impact of recent declines in energy prices.

Preliminary estimates suggest no new jobs were created on net and the unemployment rate remained stuck at 9.1% in August. Overall, net job growth has averaged nearly 43 thousand in the first two months of the third quarter of 2011 and has become weaker with each passing quarter this year. A monthly average of 97 thousand jobs was added on net during the prior quarter, while the representative figure for the first quarter of 2011 was 166 thousand. These data back up the results found in the CCI, which show that 50% of respondents found jobs hard to find—marking the highest share for this metric since 1983.