March data from the Bureau of Labor Statistics Job Openings and Labor Turnover Survey (JOLTS) indicate that job creation is slowly gathering momentum, but the construction sector, including home building, continues to lag behind.

The JOLTS data come from a monthly survey of businesses, which reports information regarding job openings, new hires, layoffs, quits and other departures.

As we discussed before, we believe there exists a shadow demand for housing in the form of about 2 million delayed household formations as a result of the Great Recession. Later this year, this demand will push the rental vacancy rate down and rents up. But for these households to form, more robust job creation must occur.

The JOLTS data indicate that this may be happening, with total job openings in February and March of 2011 at the highest levels seen since late 2008. For example, openings during 2009 averaged 2.4 million. For February and March of 2011, job openings totaled more than 3 million each month. Nonetheless, this level of open positions is still well below the level seen prior to the Great Recession, with an average of 4.5 million open jobs in the months of 2007. 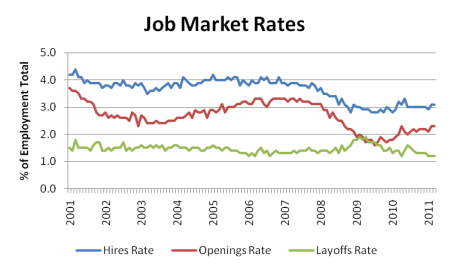 As illustrated above, the overall picture presented by the JOLTS data is one of declining rates of layoffs, improving rates of open positions (indicating increasing demand for jobs) but still weak rates of hiring. One interpretation of these facts is that while there are more open positions in the economy, there remains a structural mismatch between the skills required for open positions and those of available workers. There are also cyclical frictions impeding hiring, including a weakened housing market that is reducing population mobility. But in the long-run, the growing number of open positions bodes well for future employment reports.

For the construction sector, including home building (but also remodeling, civil, and commercial construction), the data confirm continued low rates of job openings (red line above), after some small increases associated with the home buyer tax credit in 2010. Rates of layoffs (the green line above, which displays exaggerated noise unfortunately because this data series is not seasonally adjusted) are off recent highs but remain elevated. Hire rates (blue line above) have shown some strength compared to 2008 rates, albeit off a much reduced labor force total.

Overall, the JOLTS data suggest that for the construction sector, 2011 could be the first year since 2006 when total hires (the blue columns above) exceed total separations (the purple columns, which are the sum of layoffs, quits and other departures). The data above clearly indicate just how bad 2008 and 2009 were for workers in construction, with residential construction (home building and remodeling) still off about 1.4 million jobs since the peak of employment. But through March 2011, hires are running about equal with separations thus far.

Whether home building can significantly contribute to economic growth, as it does in most recoveries, is dependent on unlocking the pent-up demand for housing, as well as unblocking the channels of financing for builders and developers to meet demand where it exists.