Today’s Employment Situation report for March from the Bureau of Labor Statistics (BLS) described a wide range of labor market characteristics, including the number of unemployed persons, the unemployment rate and the labor force, as “little changed” over the month. I see that and raise you 20 months.

It’s true that employment from either survey and the labor force are little changed from last month, but more importantly, since mid-2009. I will concede that the unemployment rate, while little changed at 8.8 percent from 8.9 percent last month, is down appreciably from its 10.1 percent peak in October 2009,  and the number of unemployed persons is down by 2.1 million from its peak, but both of those owe much to the 1.3 million persons who have left the labor force.

It’s true that growth in payroll employment in the first three months of 2011 averaged 159 thousand, better than the 139 thousand average in the last three months of 2010, but government is still shedding jobs, down over 400 thousand from its peak, and we’re still a long way from where we need to be to call this recovery.

But possibly the most important statistic for defining labor market recovery has shown real change since mid-2009. The share of long term unemployed (jobless for 27 weeks or more) has increased from 29.3 percent to 45.5 percent. 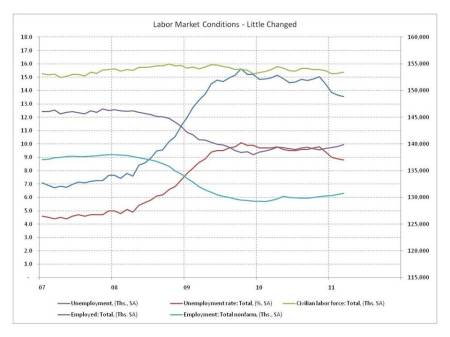 ‹ No Surprises – Private Residential Construction Spending Down in February
Are Property Tax Collections Rising or Falling? ›