No Surprises – Private Residential Construction Spending Down in February 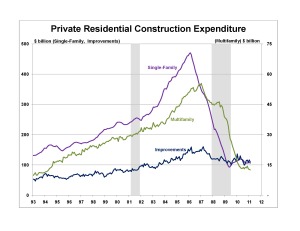 Poor weather was partially to blame for the weak private residential construction expenditures, with heavy snowfall across much of the United States during February. But overall, the numbers reflect the depressed state of the housing sector, with single-family housing starts falling back sharply to a level only marginally above their record low of April 2009 and the highly volatile multifamily housing starts down almost 50% following an irregular bounce in January.  With home improvement spending closely related to home sales, the decline echoes the very weak housing demand, with new home sales falling to a new record low in February and existing home sales down over 10%.

Government expenditures were down 1.4% in February, with notable declines in spending on water supply (-6.1%), education (-3.7%) and office buildings (-3.3%) as the spending on infrastructure through the economic stimulus package (American Recovery and Reinvestment Act) nears its end.

In sum, total construction spending was down 1.4% to $760.6 billion in February, its lowest level since October of 1999.