Higher energy prices are the primary force behind increases in building materials prices.

The Bureau of Labor Statistics (BLS) released October Producer Price Index (PPI) numbers today. The PPI for finished goods rose 0.4% from September—the same as it rose in September and August—and was up 4.3% on a year-over-year basis.

Most of the October increase came from higher energy prices, with the PPI for energy rising 3.7%, its third consecutive monthly increase. Excluding food and energy, the index fell 0.6%, its first decline following 11 months of increases, and on a year-over-year basis was up a relatively modest 1.5%.

Prices for “Materials and components for construction” were essentially flat in October after falling the four previous months. On a year-over-year basis the index was up 1.9%. However, residential building material prices rose 0.4% after falling 0.1% in September. On a year-over-year basis, they were up 4.1%, but are still down 0.9% from their September 2008 record high.

With residential construction in a holding pattern, commercial construction in the doldrums, and worldwide economic growth advancing at a moderate pace, there would appear to be little room for upward movements in building materials prices. However, higher energy prices are putting pressure on builders’ and suppliers’ costs. 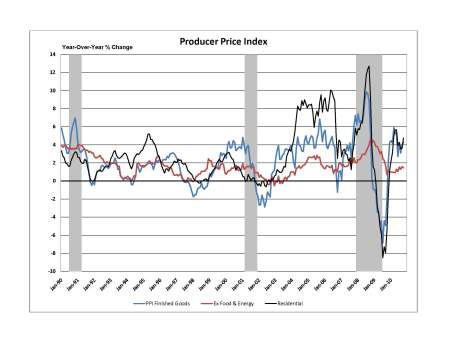