Some Good News, But Not Much, From the Jobs Report

The Employment Situation report was released today by the Bureau of Labor Statistics (BLS). The headline number was painful as total nonfarm payrolls declined by 95 thousand jobs, but as most analysts recognize, that number is polluted by federal job reductions as the temporary decennial census workforce completes its work (77 thousand temporary census jobs ended in September). With all but a handful of these temporary jobs now gone, the headline number should be a better indicator in coming months.

A more telling number is the addition of 64 thousand jobs to private payrolls. This number is weak but contributes to the 863 thousand jobs added since private sector job growth took hold in January, for an average of 96 thousand per month. But this average is still roughly 50 thousand jobs per month fewer than it normally takes to keep the unemployment rate from rising. This signals the economy is growing, slowly but surely, and is more likely to have a painfully slow recovery than a double dip back into a second recession.

This poor performance establishes the current recovery as second only to the one following the tech bubble recession in 2001, among the last eight recessions, in terms of weak private sector job growth 16 months after the official end of the recession. The unemployment rate was unchanged at 9.6 percent, down from the peak of 10.1 last October, but still the highest among any of the last eight recessions 16 months into recovery.

Saddled with inadequate labor demand in a weakening economic recovery, the prospect of rising unemployment, a private sector underperforming, and state and local governments spiraling downward, where’s an economy to turn to for relief? 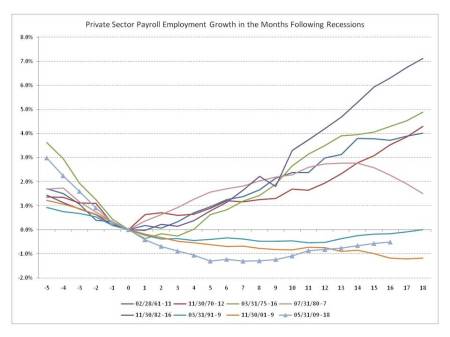