The rate of recovery is consistent across the sectors.  Single family home sales grew 10% to a seasonally adjusted rate of 3.97 million, extending the 7.4% increase in August.  Condominium and coop sales also rose strongly, up 9.8% to 560,000, adding to an 8.5% increase in August.

The recovery is broadly based with all regions showing strong improvement in existing home sales over the past two months. The strongest growth was in the Midwest, with a 14.5% increase in September to 950,000 units. This follows a 5.0% increase in August.  The Northeast also grew strongly, up 10.1% in September to 760,000, following a 7.9% increase in August.  The West added a further 5.0%, expanding on the 13.8% growth the previous month.  In the South, existing home sales increased 10.6% to 1.77 million, following 5.2% growth in August.

The NAR identify that “the housing market is in the early stages of recovery”, but suggest that the recovery “will be choppy at times depending on the duration and impact of a foreclosure moratorium”. The recovery will be supported by the high home affordability conditions, with very low interest rates and low home prices.  The Freddie Mac Primary Mortgage Market Survey show the average commitment rate of a 30-year fixed-rate mortgage at 4.35% in September (a record low), while the NAR note that “ … home prices are running around 22 percent less than five years ago …” 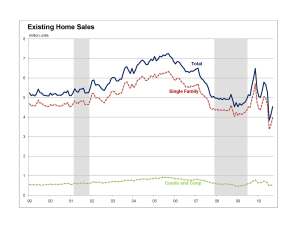