The Bureau of Labor Statistics release of the Producer Price Index (PPI) indicates that the PPI for finished goods continued its upward trend in September, rising 0.4%, its third consecutive monthly increase. On an unadjusted basis finished goods have advanced 4% for the 12 months ended September. The increase was driven mainly by higher food prices, which were up 1.2%. Food prices accounted for almost two thirds of the monthly increase in the PPI. Higher energy prices also contributed to the rise, increasing 0.5%. Core PPI, finished goods less food and energy, also advanced, but only modestly, up 0.1%. Year-over-year, the core PPI for finished goods is up 1.6%.

The PPI for finished goods has been highly variable in 2010, with month-over-month variation between -0.5% and 1.3%.  Overall it has gained just 0.4% since January. Year-over-year, the PPI has remained in positive territory in 2010, although the level has been volatile, ranging between 5.9% in March and 2.8% in June.

Food prices and petroleum prices have been the main contributor to the volatility in the overall PPI for finished goods. The indexes for food and energy prices have fluctuated widely, between -2.2% and 2.4% on a month over month basis, since the beginning of the year. Year-over-year, the PPI for food has varied between 1% and 7%, while the PPI for energy has varied between 8% and 21%. In contrast the core PPI has been quite stable, with modest month-over-month gains of between 0.0% and 0.3% since November of 2009 – June (-0.1%) was the only exception. In 2010, year-over-year the core PPI has varied between 0.9% and 1.5%.

The volatility in food and energy prices is expected to continue over the next year.  Food prices are expected to remain volatile with recent reports of poor grain harvests in the United States, combining with predictions of a global food shortage as a result of lower grain production in the Russian Federation, Europe, Canada and Australia.  Energy prices in comparison are expected to be more stable, with weak economic growth predicted for most major economies slowing energy demand, keeping prices soft.

The price index for inputs into residential construction has traditionally followed the trend of total PPI for finished goods.  Many building products such as steel and concrete are heavily energy dependent, or are derived from petroleum products – asphalt and paint.  The index also includes regular gasoline and #2 diesel fuel.  Therefore, these products traditionally follow the trend of energy prices.

Overall, we expect modest growth in the total PPI for finished goods over the remainder of 2010 and through 2011, with an average increase of 0.3% in 2011.  The 3 monthly increases in the core PPI are a positive sign, given the current low level of the PPI and the current anxiety about deflation rather than inflation. 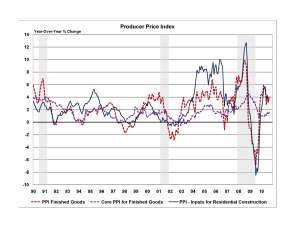 ‹ Some Good News, But Not Much, From the Jobs Report
Inflation remains very low, with the CPI up only 1.1% over the past 12 months ›