Construction Employment Continues to Grow in 2012

The year 2011 was the first year since 2006 for which the overall construction sector added net jobs. And January data from the Job Openings and Labor Turnover Survey (JOLTS) from the Bureau of Labor Statistics indicate that the construction sector continues to expand.

For the economy as whole, hiring continues at rates that add net jobs to the economy. The hiring rate in January was 3.1%, while the job openings rate (red line below) continued along its post-Great Recession upward trend.  It now stands at 2.5%. The growing number of open positions bodes well for job creation in 2012, which in turn should help support demand for both owner-occupied and rental housing. 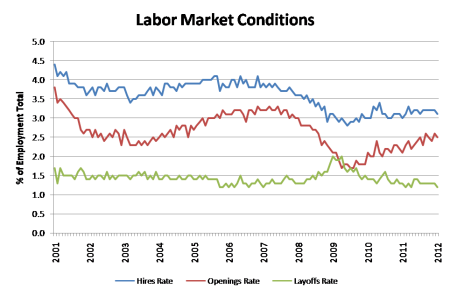 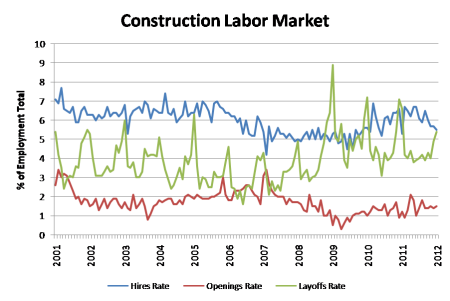 Nonetheless, total hiring in January for construction was slightly higher than total job separations, including layoffs. Net job creation was reported at 17,000. This is a good start for the year, given that total net hiring for construction in 2011 came in at 67,000 positions.

These construction job developments are positive but small indicators of improvement. The net job loss for home building (builders and residential specialty trade contractors) during the Great Recession can be found using the BLS Current Employment Statistics. Total employment for home building peaked at 3.45 million jobs in April 2006 (1.02 million builders and 2.43 million in the trades).

At the lowest level of home building employment,December 2010, total jobs in the sector had fallen to 1.99 million, a loss of 1.46 million jobs. And this accounting is just the direct employment effects, which excludes the spillover losses that occurred in businesses associated with home building and remodeling.

‹ Existing Home Sales Up Strongly From a Year Ago, Slightly Down from a Month Ago
Property Taxes Remain Historically High ›